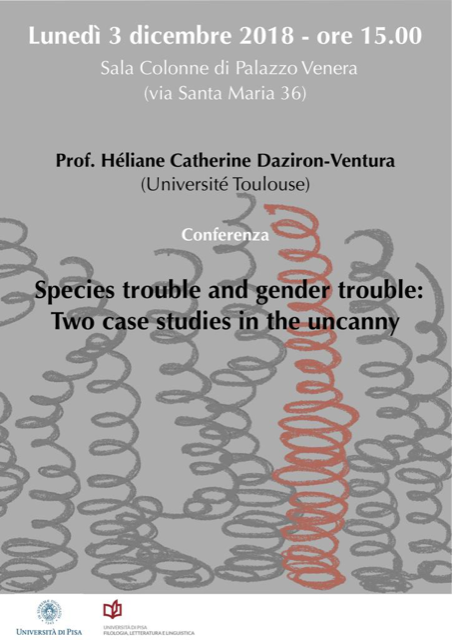 Starting from Jentsch’s definiton of the uncanny in 1906, I will move on to Freud’s in 1918 and finally to Lacan’s more recent ones to envisage the fundamental self-alienation of the ego, the foreigness that lies within us, and which is represented in literature through animal metaphors or instances of discontinuous identities.

I will use the concept of inappropriate/d other that Donna Harraway borrowed from Vietnamese-American film maker and feminist Trinh Minh Ha (1992) to propose an interpretation of two stories by Alice Munro, “Bardon Bus” (1982) and “The Albanian Virgin” (1994). The former addresses the portrait of man as dog and the latter creates a fictive genealogy of true historical figures ranging from Saint Claire of Assisi to Claire Claimont in Victorian times for her own fictive and “enlightened” Canadian character.

I will lay the emphasis on what Harraway calls “deconstructive relationality” which makes “potent connection that exceeds domination”. The one who is inappropriate does not occupy a fixed position, he is not reflecting the sacred image of the same; there is “something inappropriate, unfitting and so maybe inappropriated” in the positioning that he adopts. I will also use two of Judith Butler’s essays, “Gender Trouble” (2005) and “Giving an Account of Oneself” (2006) to consider the development of pluristable identities across time and space and the construction of character as an incremental process with potent intertextual and intercultural ramifications.